YouTube is one of the biggest media networks in the world, and the latest to use the platform to build an audience on more closely resembles animations.

This new breed of YouTuber began increasing in popularity recently in Japan, growing from 1,000 virtual YouTubers in March 2018 to 5,000 as of October 2018. [J] 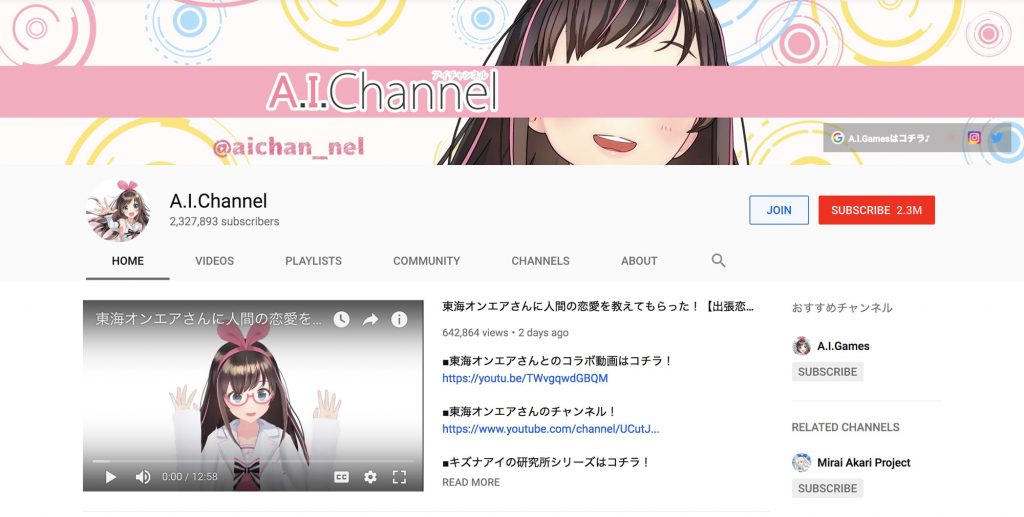 What are virtual YouTubers?

Virtual YouTubers are like your average YouTuber – they vlog, review products, tell stories.

The only major difference is that rather than being front and center in the videos as themselves, the majority of the video is done features the YouTuber as an animated character.

The character is created by motion capture technology that tracks the person’s movements, and each virtual YouTuber has their own techniques. A few companies working in this space that some of them work with are iKinema, Activ8 and FaceRig.

Voices for the characters are typically done either by voice actors or by modifying the user’s voice.

Some of these early virtual YouTubers have been able to gain large audiences.

Kizuna AI is the most popular virtual YouTuber [J] with more than 2.3 million subscribers on YouTube. Following behind her are several others with subscriber numbers in the hundreds of thousands such as Kaguya Luna, Mirai Akari and Siro Channel.

They often have sizable audiences in other channels as well. Kizuna AI has 481k followers on Twitter and 111k on Instagram, for example.

Some also dabble in music, and Japanese TV has worked with virtual YouTubers such as Kizuna AI and Fuji Aoi.

Virtual YouTuber Fuji Aoi mixing the virtual and real worlds in a video.

Taking things in the physical world, Kizuna AI has plans to do a live performance with tickets averaging around USD $80. [J]

Some companies and government agencies in Japan are already using virtual YouTubers for marketing purposes. Many virtual YouTubers demand that their identities are protected so even during the negotiations, there’s often no face-to-face meeting or identity reveal.

Just how big the virtual YouTuber space will grow is unknown, but as with any type of influencer marketing, the goal is to get the brand or product in front of a popular and engaging account.

Right now, virtual YouTubers are providing a fresh option for that in Japan.