What Influences Japanese in Their Travels | TAMKO

What Influences Japanese in Their Travels

In the past year, 17 million Japanese traveled outside of Japan, only 14% of the total population. This percentage is quite small when compared to other Asian countries like Taiwan (63%) and South Korea (43%), so we’ll examine the Japanese mindset when it comes to traveling.

There are 2 overarching factors that influence many Japanese to stay within its borders: The psychological factor and the reality factor. Psychologically, some Japanese feel that traveling domestically is enough for them while others are simply unsure about leaving. The reality, on the other hand, is that it’s often difficult for people to take long vacations in Japan due to the work culture.

This trend is looking up, however. In the first quarter of 2017, there’s been a 5% increase in foreign travel by Japanese, partly due to the rise of low-cost carriers (LCC’s) and an increase in the variety of accommodations.

Before getting to know about their behaviors when it comes to travel, we break Japanese down into 5 groups. 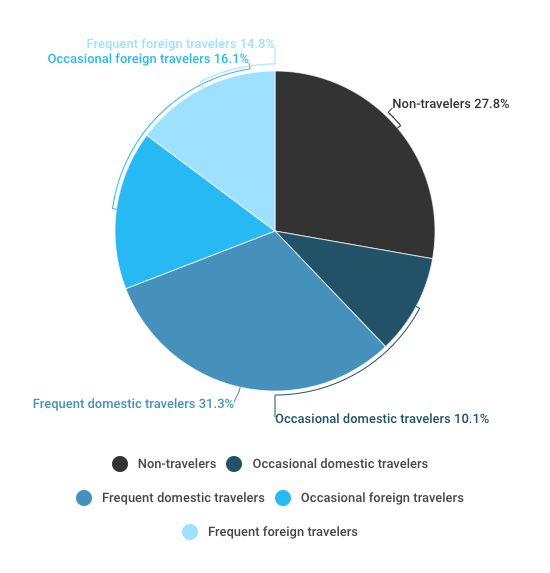 Travels abroad every 1-3 years, and usually, travels more than 3 times domestically during that period.

Main reasons:  “There’s a direct flight available to the country I want to go,”  “Easy to ask for vacation,” “A cheap travel package is available”

It’s worth noting that the number of the frequent foreign travelers is increasing, +5% compared to the previous year, meaning that if those mental factors can be eliminated, more Japanese would be willing to travel abroad more frequently.

Usually only travels domestically, but if invited (usually by a frequent foreign traveler), or for reasons such as family trips or a graduation trip, they will agree to go abroad.

Main reasons to not travel abroad: “Concern about safety at the destination,” “Passport is overdue, it takes time to renew,” “It takes time to arrange the schedule” etc.

Only travel within Japan, no interest in traveling abroad.

Rarely travel, only travel for an event or if invited.

The majority (69.1%) of those who travel abroad book their flights and hotels online, with women in their 40s being the largest group at 80%. Surprisingly, younger 18-29 year old women were found to prefer booking through brick-and-mortar travel agencies due to “too many choices online that confuse me.”

A few reasons may contribute to this. They many not have much experience traveling abroad, making a face-to-face talk easier to understand details. Japanese travel websites may also not be designed for the psychology and preference of the younger traveler, as many still tend to be cluttered with small text and little ads and offers. A third reason may be simply that many businesses at their destination either don’t market to Japanese or make a half-hearted effort to.

In recent years, Japanese prefer traveling to nearby destinations due to being able to schedule it on a weekend, with Taiwan (12%) and South Korea (8%) being their top choices. When they have longer vacations, like “Golden Week” (Japanese national holidays during April or May), Hawaii (15%) or historical places in Europe (15%) are their top choices.

The majority prefer to travel independently regardless of destination, but women tend to stay in one city while men are more likely to travel to multiple cities.

Frequent foreign travelers have a lot of influence on their peers when it comes to travel. They’ll guide others on any must-buys, must-eats, and inform them about the latest trends that typical Japanese don’t know about.

They tend to desire traveling like a local, interacting with locals as well, so they tend to prefer hotels that are in tune with the local community and lifestyle.

Because many of them have an online presence, companies in the tourism industry may be able to gain a lot by cooperating with them for influencer marketing work. It would help reassure Japanese, as well as help them overcome the difficulties of not knowing which choice is best for them. The typical soon-to-be Japanese tourist relies on Japanese media and influences rather than more global ones.